The Effects of World War II on Black Mountain College 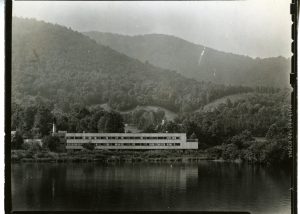 This website was created as a project for the Digital History course at the University of North Carolina- Asheville. The purpose of this website is to explore Black Mountain College (BMC) during World War II. Our desire was to create a fun, interactive, and easy-to-understand narrative that anyone can enjoy. There are three main sections of the website as well as supporting pages that will give you more information about this project, the creators of this website, and where you can go to find additional resources for this topic.

The “Those Who Came” section of this website gives the stories of four individuals who came to Black Mountain College as refugees during or shortly before the war. Josef Albers (and his wife Anni) came to the college shortly before war broke out in Europe. As professors at the Bauhaus Institute in Germany, the couple fled the country after the Nazi party shut the institute down. Josef Albers’ page tells the story of Albers’ journey from Germany to the BMC. Peter Bergmann also came to the college as a refugee during the war who eventually came to teach physics at BMC. Fritz Hansgirg had a very different journey before finally coming to BMC, working in Japan and being held in a U.S. internment camp before he was released to teach at BMC. Finally, this section features a page on Henrich Jalowetz, beloved music teacher of BMC. While all of these figures are notable refugees who were very important to the college, they are a small sampling of the large number of refugees and immigrants that were drawn to BMC. 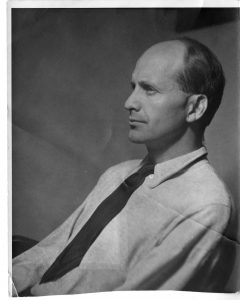 Theodore “Ted” Dreier, one of the founders and vital faculty members of BMC.
Courtesy of Western Regional Archives.Fig. 2

“Those Who Stayed” explores various aspects of life on campus for those who remained there during the war. Supporting the War gives various examples of how the campus faculty and students supported the war effort. Education in a Time of War shows the different ways that the school changed its approach to education. Building in a Time of War discusses different obstacles the college faced in trying to build, repair, and maintain their campus during the war. This section also includes a special interactive game that allows players to help build the Studies Building, one of the many structures built by the students and staff of the college. This interactive component includes puzzles that must be solved in order to view digitized original photos and documents pertaining to the building of the Studies Building.

“Those Who Left” gives the stories of four individuals–two faculty members and two students–who left BMC to join the armed forces or help the government with war-related issues. Derek Bovingdon and Roman Maciejczyk were both students who joined the military and met with untimely deaths. Roman was one of the small number of students who actually graduated from BMC. John Evarts was a much loved instructor of music who remained in Germany to help rebuild the culture of the country after the war. Professor of Chemistry and Physics Charles Lindsley, the last individual featured in this section of the website, did not in fact join the armed forces. Rather, Lindsley was invited to help work on a physics project for the government. These four were just a few of the individuals who left the college to participate in war efforts in one way or another. 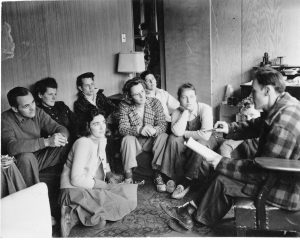 The About Page tells more about this website and the project and course that lead to its creation. It also contains information on the three creators of this website, Joe Mitchell, Keira Roberson, and Kristen Walden.

The Additional Resources page provides links to various sources for anyone who is interested in learning more about Black Mountain College. As an extremely diverse and experimental institution, the story of Black Mountain College a vast and rich one. The college during the war is just one small piece of a much bigger picture. We encourage anyone who is interested in learning more about the college to visit the websites and institutions located on this page. There is something of interest for everyone at BMC!